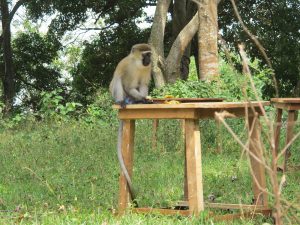 Animals are faced with a potentially over-whelming number of factors when foraging for food resources that differ in size, quality (energy available, rare nutrients, ease of digestion), distance, ease of access, predation risk, inducement of competition, etc. How they make quick decisions regarding which resources to visit is largely unknown. In our lab we are utilizing foraging experiments to understand how vervets find food, solve multi-destination routes with several resources, and decide what resources to visit first. In our study system at Nabugabo, Uganda, individual vervets voluntarily leave their group to complete our experiments before returning and going through the experiment with others. This has allowed us to compare the same individuals for decisions made while solitary versus when social, showing different strategies in these situations based on dominance rank.

Animal movement research has blossomed in the last decade, benefiting from better methodologies and technologies. We are applying these new methods to better understand how vervet groups move through their home range and search for food resources. We are also examining who leads group progressions and how success in leadership can change over the life history of an animal.

The montane subspecies of Colobus angolensis (C. a. ruwenzorii) shows very large (~300 members), relatively cohesive groups in mountainous areas but large-scale fission-fusion events in lowland areas. Our goal is to understand how these societies are organized and which individuals show the most important relationships in the lowland population at Lake Nabugabo, Uganda. Our data are showing that C. a. ruwenzorii are forming a multilevel society (the first in an African colobine) and we are assessing how many tiers of social organization are present. Our data also show that about 50% of core units are multi-male, multi-female, a social system not seen in extant primates except humans; raising many questions regarding the selective pressures leading to this system and the evolution of tolerant male relationships. This work will allow a greater understanding the larger impacts of ecological constraints and the strategies of group mates on the evolution of primate social systems.

C. a. ruwnenzorii show male natal attraction and infant handling at far higher rates than those seen in congeners. All males in core units handle infants and we are working on understanding why these interactions are so common.

During my MA at the University of Calgary under the supervision of Dr. James D. Paterson and my PhD with Dr. Pascale Sicotte I worked at the Boabeng-Fiema Monkey Sanctuary in Ghana where I studied social organization in ursine (or white-thighed) colobus (Colobus vellerosus). I contrasted ecological factors (i.e., range size, food availability, scramble competition for food) with social factors (i.e., infanticide risk, male sexual coercion, male advertisement, female mate choice) to explain variation in group size and group composition. I found that the rate of infanticide by immigrant males was high and that resident males often defended infants. While food competition constrained group size at the upper end of the continuum, infanticide risk played a more important role in determining social organization, limiting group size earlier and having more of an effect on group composition. Infanticide risk increased with female group size because immigrant males were attracted to larger female groups, thus females attempted to keep group size small by resisting female immigration, evicting maturing nulliparous females, and dispersing when groups became at risk for male takeover. Male qua 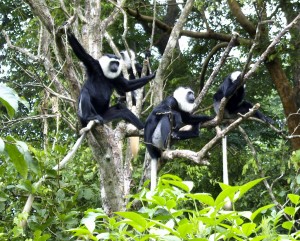 lity was found to be important to decreasing the risk of infanticide and females attempted to immigrate into groups where the male(s) won more encounters against the male(s) in the females’ own group. Within groups, male agonistic display output indicated fighting ability; however, males did not vary in their testosterone or parasite levels except when they dropped in rank and were involved in male-male fights. Females did not appear to use male agonistic display to inform their mate choices and seemed to mate promiscuously, perhaps as a counter-strategy to the high rates of infanticide.